Here's the beginnings of a mystery project to be revealed in the coming weeks. 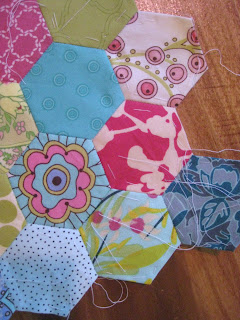 I'm currently working on three projects simultaneously which makes me feel very productive but also makes the finished products very slow in coming. I need to quilt my Quilts for Kids quilt and finish the last five blocks for my bee quilt. Hopefully I'll have something to show for all this sewing soon.
Posted by teaginny at 7:58 PM No comments: Links to this post 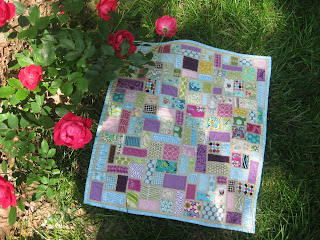 I loved the first one so much, and it left me so quickly, I just had to make another tickertape quilt. At 20 x 23 it isn't a lot bigger than the first one I made, but it seemed to take much longer this time around! Still a fun process though. I probably liked it for a lot of the same reasons I enjoy puzzles. 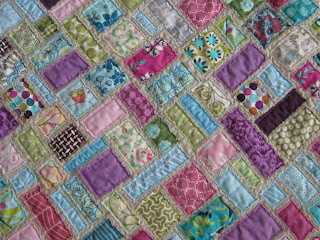 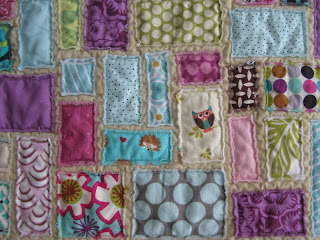 I sewed this one with a linen colored cotton, instead of stark white, and I like how it allowed me to use some cute prints with white or light backgrounds that would have washed out on the other quilt. 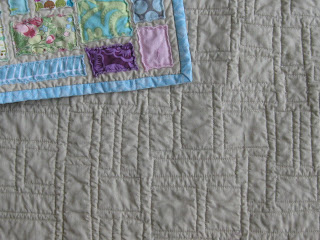 As before, I just love how the back looks! 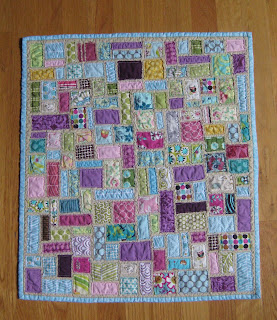 This is headed to its new home in Switzerland!
Posted by teaginny at 2:21 PM 7 comments: Links to this post 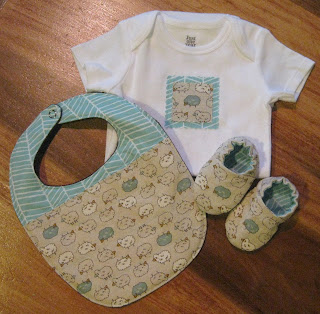 I've got a baby shower to attend on Saturday. The challenge - a gender neutral gift since the parents are not finding out the sex of the baby. I found this cute sheep Kokka Trefle fabric, and it pairs nicely with this herringbone print from Joel Dewberry's Modern Meadow. This print goes with so many things! 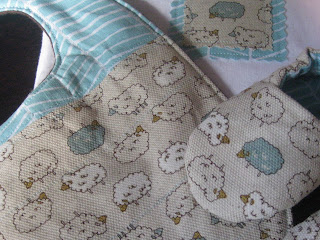 Posted by teaginny at 7:01 AM 4 comments: Links to this post

Here are the items, sewn with love, heading over the ocean to my sweet nephew. I can't wait to see him! 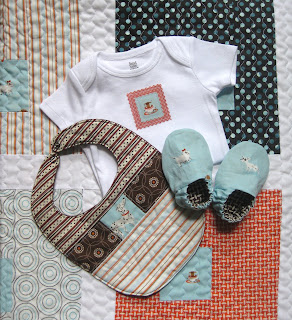 The sweet little booties are made with a great pattern by Beth of weepeareas. She is selling a DIY kit in her etsy shop, so I got not only the pattern but precut booty pieces in this adorable Japanese fabric! She even included a bonus set of pieces to make a pratice pair of booties. The best part is that these booties have no exposed seams and are reversible! Cool, huh. 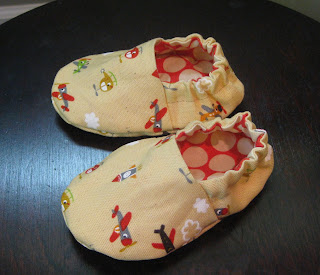 And keeping with my recent trend of making two of everything, you can find a nearly identical doggy baby boy gift set in my shop, if you need an extra special gift!
Posted by teaginny at 7:06 AM 1 comment: Links to this post

Out for a Walk - Finishing, Option 2 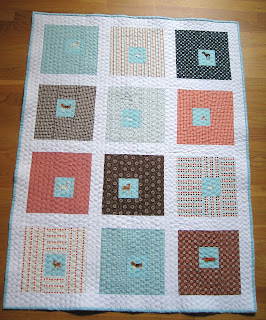 For my second Out for a Walk quilt, Iwanted a softer feel for the quilting, in contrast to the straight lines of the first quilt. I saw a great technique on Jacquie's blog a while back I wanted to try. It is a stitch on my machine, and I changed it slightly by increasing the stitch width to the max, giving me this fun allover wave effect. 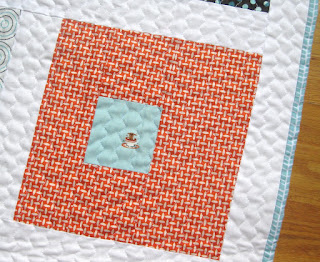 For the back I chose to use Kona white with three funky, off centered dog squares bordered in a print from Joel Dewberry's Modern Meadow. I used the same print for the binding. 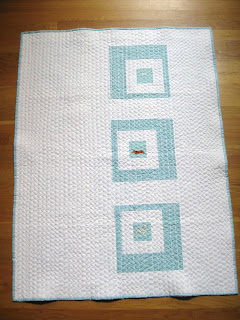 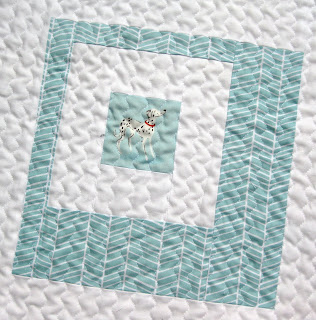 Check out the previous post for a tutorial for this quilt. I think this one is my favorite of the two, but I love them both!
Posted by teaginny at 11:21 AM 6 comments: Links to this post

Inspiration recently struck in an odd place - DSW. I saw this pair of shoes, and the color combination knocked me out. I went home and started looking for fabric in gray and plum.

A couple of weeks later a more traditional source of inspiration reinforced my need to make a purple and gray quilt right away! 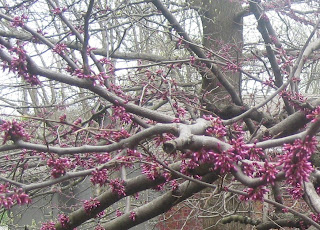 The particular pinky purple of redbud blossoms is actually really hard to find! Here are the fabrics I've collected. A couple of rejected "too pink" fabrics are in my swap set on flickr, if you need pink and want to trade. :) 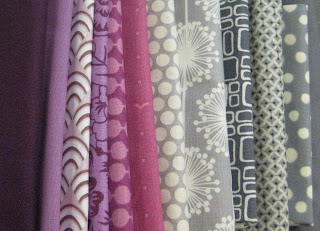 Posted by teaginny at 6:38 AM 9 comments: Links to this post

I'm now it two online quilting bees and having lots of fun trying new blocks and using fun fabrics. Here are some of the most recent blocks I've made. 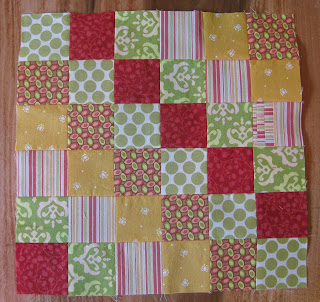 Liz from Bee Addicted 2 asked for geometric blocks featuring squares or rectangles. This was surprisingly fun to make. It helped that I love the fabrics - Heather Bailey's Freshcut. I added the Amy Butler full moon dots - another fave. 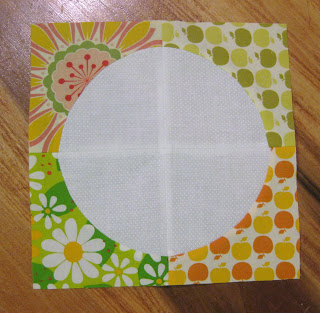 The April block from Bee Addicted 2 was straight forward. The curves weren't that bad I found. 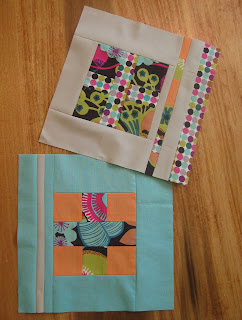 These blocks were for my new bee, Bee Lovely. Olivethebeach left things wide open by asking for geometric blocks and giving us some inspiration photos. I chose to do a spin on the me + you block. Her fabrics were really fun - something I'd never have picked. 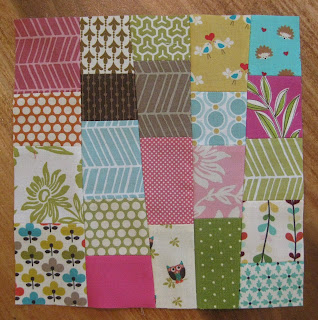 Finally, my most recent block (done with the one for May already!) for Bee Lovely is for Tammie. It is the Map of the States block, made from a tutorial by Oh Fransson. I won't be making this block again. It's not that it isn't cool. It is. The problem I had with it is that it looks like an improvisationally pieced block, but it has #1 none of the benefits of such piecing and #2 all of the hassle of templates (see previous post!) and adding seam allowances, etc. I'm glad I did it, and I think Tammie's quilt will be stunning, now I'll move on the the next month.
Posted by teaginny at 6:12 PM No comments: Links to this post 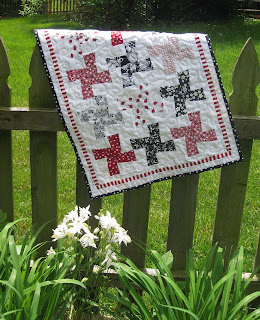 This tutorial is the result of my quest to find a way to make whirligig blocks without using a template or having to trim the block. There are a lot of great tutorials out there, but they do include templates or trimming, and I'm afraid I don't have much patience for either of those, unless they are absolutely necessary. My first clue came from this tutorial using charm squares. No trimming and no template! Unfortunately these blocks are way bigger than I wanted, since I was going to make a doll quilt. I took the principle and shrunk it to get a 5 inch finished block that is trim-free (hooray) and template-free (yippeee). Enjoy!
Trim-free, Template-free Whirligig Block Tutorial

The little doll quilt I made used 12 of these blocks with three small borders. The finished quilt is 19 x 24. It is a birthday gift for a special little girl, but it's twin is for sale in my shop! 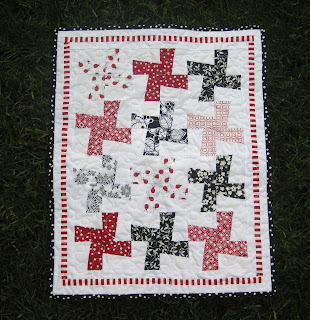 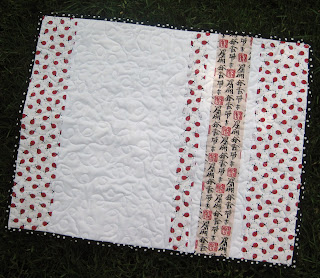 I think my free motion is slowly improving.
Posted by teaginny at 12:34 PM 5 comments: Links to this post

And the Winner is...

Comment #25 from MeganZ was chosen by the random number generator as the winner of Plume Sails. Congratulations Megan, and I hope it looks great in your new cabin!

Coming in a day or so - a tutorial for template-free, trim-free whirlygig blocks.
Posted by teaginny at 6:08 PM 1 comment: Links to this post