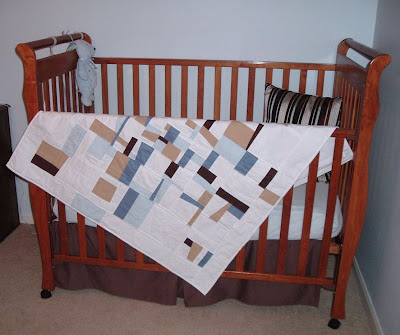 It's finished! I'll try to get some better pictures in the morning, but I had to share the first glimpse of the finished quilt. 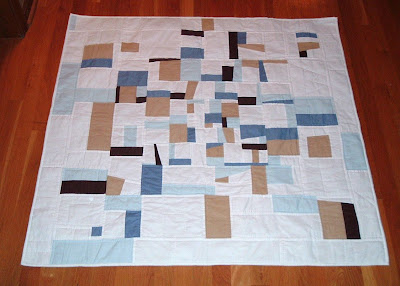 I had no pattern, so I followed a method of crazy quilting by Weeks and Ringle. The piecing is random, but if you look closely, you can see that the pieces are sewed into stips of a certain width and pieced in a log cabin (around and around the center) style. The hand quilting is also random. I mostly outlined the larger pieces or groups of pieces, but I snuck some personal symbols in too. Can you spot one below? 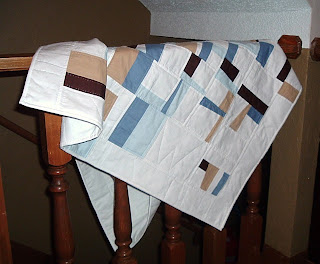 It was inspired by Korean piecework called pojagi. I don't know much about this style (most sources are in Korean or Japanese!), but it doesn't appear to be layered or quilted, just pieced. My version is obviously a Korean-American hybrid because I layered it and quilted it the traditonal American way.

Here are some of the photos of real pojagi which inspired me. 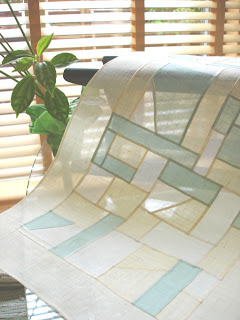 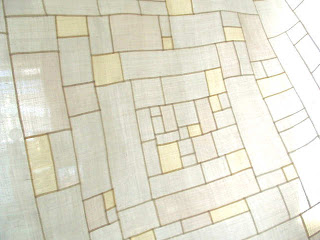 I like your interpretation. There's a very artsy look to it, but it preserves the traditional feeling, as well. Thanks for sharing the picture and how you did it.

I really love your quilt. On your website you referenced a crazy quilt pattern by weeks and ringle. May I please have the title of the pattern and any information that will help to order it for myself? I recently saw the images of the Pojagi quilts and fell in love with the designs. I am eager to learn how to make one for myself. I have never made a crazy quilt and I am completely at a loss as to how to begin to create one. I would really appreciate any help you can offer.

Sorry I'm just getting back to you Kimberly, but I can't access any contact info for you. I found the pattern in an old edition of American Patchwork and Quilting magazine. Lat me know if you see this post, and I'll try to dig it out to give you the issue date and number!